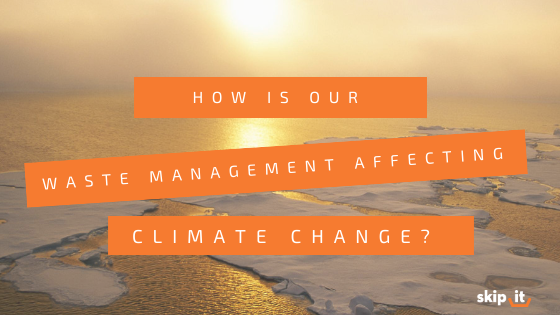 It is no secret anymore that our climate is changing – and it’s not for the better it would seem.

With extreme heatwaves and sudden wildfires, the world is finally starting to believe that the threat posed by climate change to our planet is real. Most of these natural disasters are caused by climate change. Did you know that our handling of waste management is one of the major catalysts for rising global temperatures?

Read on to discover how waste management is affecting our climate and how you can help Skip It work towards a cleaner and greener environment.

The truth about climate change

At this point, we are all aware that global temperatures are rising, which is set to have an extreme impact on the environment and humanity itself. In the here and now, global warming is causing increasing droughts and wildfires.

In fact, most of the warming has occurred in the past decade, with the five warmest years taking place since 2010, and 2016 being the warmest year on record. Moreover, sea levels are rising drastically, due to the melting of ice sheets in Antarctica, which has caused more flooding in recent times.

According to data from NASA’s Gravity Recovery and Climate Experiment, between 1993 and 2016, Antarctica has lost around 127 billion tons of ice, while Greenland has lost an average of 286 billion tons, with the rate of ice mass loss tripling in the last decade alone.

Increased temperatures have also resulted in more violent weather and higher sea levels, which, in turn, is leading to many hurricanes, typhoons, and severe storms, posing a major existential threat to several countries, especially those living in areas barely above sea level.

The detrimental effects of waste management on climate change

The Earth’s average surface temperature has increased by 0.9 degrees Celsius since the late 19th century, with the main cause being the emission of carbon dioxide and other human-made pollutants – carbon dioxide and other greenhouse gases are major products of waste, but they can sometimes seem almost invisible to the naked eye, but their impact can be devastatingly obvious.

Several UK waste collection companies rely heavily on landfill, using it as their main waste disposal method. However, large amounts of biodegradable waste ending up in landfill lead to increased methane production. As this greenhouse gas cannot be fully controlled, it ends up being inadvertently released into the atmosphere, contributing negatively to global warming.

In fact, the UK’s waste management sector is responsible for four per cent of the country’s greenhouse gas emissions.

The more we consume disposable materials including recyclable plastic packaging, the more waste we produce. The higher the volume of waste production, the more harmful disposal methods and industrial energy we use, such as mechanical-biological treatment and incineration, which both release damaging pollutants into the atmosphere.

How can Skip It help?

Using more composting and recycling methods can make a significant difference, reducing the amount of harmful chemicals being released into the environment.

Skip It is dedicated to recycling and resorting to other natural methods as much as we can, to save our planet. We avoid landfill sites at any cost, with 95 per cent of the waste we handle getting recycled by our network of accredited recycling centres.

We also offer a wide range of reliable waste collection services, whether you would like to dispose of your household or business waste. Our friendly team of professionals are on-hand to get the job done for you, with the safety of the environment at the core of everything we do.

When booking an efficient service with us, you can rest assured that your waste will be disposed of responsibly, as we seek to lessen the likelihood of damaging the climate.

Contact us to find out more about how you can help can save our planet and book a reliable service today.

How Do I Manage My Garden Waste?

When living in a home with a garden, gardening becomes one of the top-priority chores to keep your property in the best condition. As much as it’s essential to...

How Do I Dispose of an Old Washing Machine?

When your washing machine breaks, or you’re looking to upgrade to a new one, it can be quite a stressful task to get rid of the old one –...
Make an Enquiry